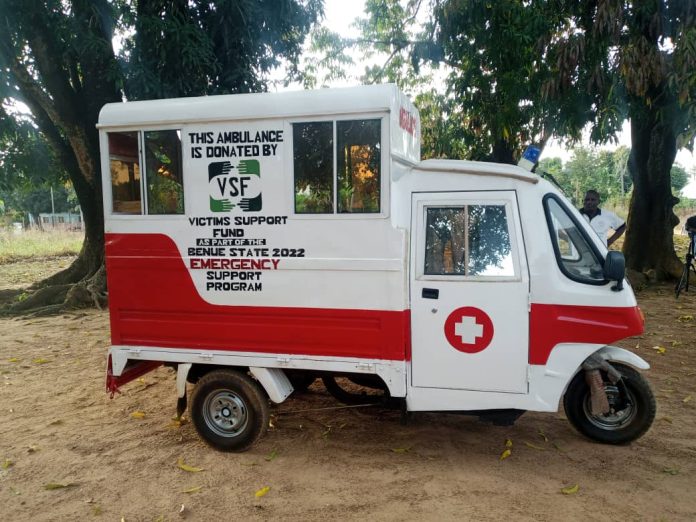 The IDPs were displaced during their communal crisis with neighbouring Bonta community in Konshisha LGA.

The Chairperson, VSF Benue State Emergency Support Programme, Mrs. Toyosi Akerele-Ogunsiji who presented the items to the community explained that the intervention was to ameliorate their sufferings.

She said “This programme has been on for the last five months.  “We started in May and we are targeting a minimum of 6,000 households in Benue State who are receiving food and medical materials. This will reach at least hundreds or thousands of different families across the most vulnerable communities in eight LGAs of the state.

“I earlier announced that we are donating shelters to Ortese IDP camp and we are launching economic empowerment programme as part of this project so that we are able to give most of those people that we have been giving food items and supporting, some economic grants to help them restart their lives, have some form of businesses to be able to sustain their families after this project.

“We have also embarked on complete rehabilitation and solar powered automation of the Naka waterworks in Gwer West LGA to check cases of outbreak of water borne disease in that area.

“This is a project that our Chairman, General TY Danjuma is proud of, given that he is a detribalised Nigerian Philanthropist himself.

“We will commence direct disbursement of cash and sewing machines to these advantaged persons in the camps starting from today (Wednesday) so that they can engage in meaningful ventures while in camps. We are very transparent in whatever we do in VSF.

“We have carried out total renovation of three health centers in Oju and donated tricycle ambulance, wheelchair, drugs,  to health centers in the benefitting Communities. The ambulance is symbolic because it will assist pregnant women and other Victims. I want to urge  you to keep and maintain those items very well so as to attract more of such, in future.

Receiving the equipment, the officer in charge of the health center, Metron Marta Ukpute, appreciated the kind gesture extended  to their facility by VSF, saying, they will use those items for the purpose they were meant for.

the Oju local government director of security, Mr. Ugbe Emmanuel, stated that security issue is a problem in Nigeria, stressing that government and public spirited individuals must join hands  together to arrest the situation.

He assured that the council will do everything possible to support the health center to ensure that those items are properly put into use.

PRESIDENT BUHARI TASKS NIGERIANS TO OWN RESPONSIBILITY OF DISCLOSING INSECURITY

POLICE NAB COUPLE, ONE OTHER FOR ALLEGED MURDER OF HOTELIER IN OGUN